The intoxicating aroma of artisan bread baking in the stone hearth ovens of the bakery next to Z Space in San Francisco’s Mission district, turned out to be the only wholesome feature of an evening spent in the company of Amy Seiwert and four other choreographers whom she chose to collaborate on a fairy-tale-themed program that closed the month-long West Wave Dance Festival. 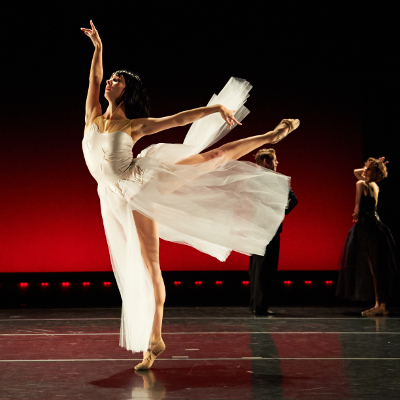 Knowing a little of the work of Seiwert, Maurya Kerr, Milissa Payne Bradley, Julia Adam and Robert Dekkers, I did not expect the Disney treatment, but was unprepared for the darkness and carnage on display in Make.Believe. These five dances brimmed with sly wit and macabre invention. No two resembled each other, but all gave startling insight into the psyches of these five masterful young dance-makers.

Shelter, by Payne Bradley, led us gently into the abyss. Seven young children sprawl downstage in their pyjamas, engrossed in their iPads. As the house lights dim, the glow from their iPads lights their faces and serves as footlights throughout the piece. As if conjured by their imaginations – or by the omnipotent Apple – the lovely Jamielyn Duggan, Shaina Leibson and Rachel Speidel Little appeared upstage, attired in simple but elegant halter playdresses, matching headbands and pointe shoes. They gamboled with a ravishing, modern refinement as a voice (sounding very much like Judi Dench) started to narrate the story of the Three Little Pigs. Ominous electronic music by Ryan Gregory Tallman combined with city noises started to intrude into the voice recording, which became choppy and distorted, as the Wolf made his entrance. Or rather, Bryan Ketron, in the guise of a banker, dapper in suit and tie. He vanquished the first two Pigs in pas de deux, but met his match in the defiant, resourceful Speidel Little, who rallied the troops to finish off the Wolf. Armed only with the tools of classical ballet and an evocatively engineered score, Payne Bradley turned the Three Little Pigs into a fantasy of Occupy Wall Street: simple but decent folk banding together to slay the Man.

In La Belle-Mère, Julia Adam gave us a sweeping back-story of all the Wicked Stepmothers in fictional history, in the person of Jane Hope Rehm. Abused and deprived of affection as a young child, struggling to live up to conflicting expectations of womanhood, the lovely, fragile-looking Rehm waltzes through the stages of her life in a stunning backless gown, a Christine Darch creation, whose skirt floats in the air as she descends into mania. Traumatic episodes are evoked through delicate, balletic movements; a few are more graphically illustrated. Anguish wells up in Rehm’s expressive eyes, and she vents her frustration on a stuffed animal – kissing it, kicking it, beating it.

Maurya Kerr pays homage to Angela Carter in Brutalisms, which opens with the savage grunts of a faceless caged beast, her back to us, while Chris DeVita plays a sadistic mind-game with Linda Steele II. He beckons her as she advances lethargically, then, as they grapple on the floor, he repeatedly commands her to “come” then “stop.” Unlike the other pieces, this is a series of disjointed vignettes that expose the absurd and often dark underbelly of intimacy. Robyn Gerbaz and Chris DeVita perform a strained duet in silence, which culminates in her kissing and snuggling up to his socked foot. In contrast, solos by Alex Carrington and Megan Wright – one combative and mistrustful, the other majestic and yearning – mess with our perceptions of what is “human” versus “beastly.”

Amy Seiwert’s Mirror deconstructs the insecurities of the middle-aged woman confronted by insouciant, youthful beauty. Katherine Wells and Rachel Furst, in long romantic tutus with bustles, face off in a trio with Weston Krukow who, in a brilliant choreographic stroke, plays the prince and a mirror. Impeccable in his tuxedo, Krukow imitates the women’s movements, and chivalrously extends his partnering services – though we suspect he is more in love with himself than with either of these damsels. Furst, in a wig that gives her a jet black, chin-length bob like Disney’s Snow White, blithely trips through her balletic variations while Wells tries to keep up. A signature piqué into high arabesque expresses their shared aspiration to a conventional happily-ever-after. Wells anxiously contemplates her feet as they turn inward – a vivid ballet metaphor for what she fears is a deterioration of her looks. The comedy is both gentle and stinging. As with Shelter and Belle-Mère, Mirror felt like it was driving toward a more savage resolution, but fell slightly short.

Robert Dekkers’ Redhood’s End set the stage on fire. In a surreal time warp with echoes of the 50’s, Dekkers plays Thom Wolfe, the classic young hoodlum with vampire tendencies and an abusive, beer-swilling dad, who wields the TV remote control like a weapon. Charley Cohen is the innocent Little Red who, rebelling against her uptight mother, falls hard for Wolfe, who seduces her with what surely will go down in ballet history as the longest, the lustiest and most athletic kiss. He steals her virginity, along with the headphones off her head. Christian Squires is formidable as a priggish schoolteacher and drag queen Gran-Gran Em Fazzemah who lures Wolfe into an S&M encounter that ends badly for all except the triumphant Little Red. Ballet being full of death and destruction (think Giselle, Swan Lake and Bayadère), Dekkers is merely following in the footsteps of the classics. His outstanding achievement lies not simply in the retelling of Little Red Riding Hood, but also in the precise way he uses the uneasy listening score by British experimental pop sensation Micachu and the Shapes to forge his characters’ movement.