SPF 6, the sixth annual Summer Performance Festival for fledgling modern dance companies in San Francisco, closed on Sunday with an irresistible chamber ballet by The Milissa Payne Project that brought down the house at the small-but-splendid ODC Theater in the hip Mission district.

Up in the Air, set to snippets from string quartets by Mozart, Beethoven, and Mendelssohn, in exuberant interpretations by the Calder Quartet, features eight classically-trained dancers in a joyful, narrative-free riff on neoclassical technique, shot through with tenderness and whimsy. Choreographer Milissa Payne Bradley rides the music like a surfer carves the waves. She propels her ensemble at lightning speed through sculptural patterns that flirt with symmetry and canon, and give us beauty in disarray. There is an edginess evident in the skids and slides across the floor, in the abrupt finishes of some of the turns and jumps, and in the seamless assimilation of “found” gestures into the classical vocabulary. 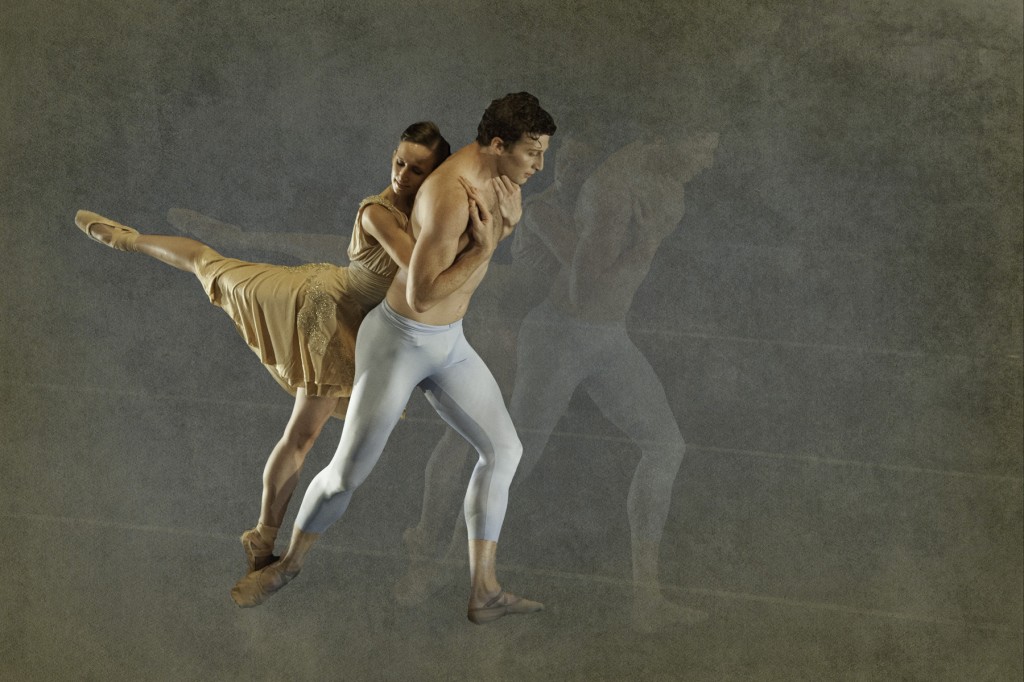 The piece opens in silence, with the regal, voluptuous Megan Wright sprawled on the ground in a pool of light, as if asleep; only the delicate wriggling of her inquisitive fingers gives her away. The tiny movements become sweeping gestures, and we are reminded of Frederick Ashton’s Five Brahms Waltzes, a tribute to the San Franciscan pioneer of modern dance, Isadora Duncan. The women’s flowing apricot-hued dresses, gathered at the shoulders, cinched at the waist, lightly accented with beading, pay homage to Duncan’s Grecian-inspired tunics, which showed a daring amount of skin (daring for the early 1900’s). The entire piece, in fact, serves as an ironic comment on Duncan’s denunciation of classical ballet in favor of her own construction of “free dance” and her wacky elevation of Greek ideals.

The angst and torture that fill much of contemporary ballet by Forsythe, McGregor, Wheeldon and company is banished from the world of Up in the Air. There is great affection between these dancers. Wit, teasing, and humor abound – as when Wright ends a grace-filled conversation with Jackie Goneconti by picking her up in the most ungainly fashion and carting her off into the wings. Or Marlowe Bassett, who thrills us with her long lines and fabulous balletic extensions, then walks offstage stiffly in the manner of an Egyptian relief painting: two-dimensionally, with arms thrust in parallel in front of her body.

With four of the women on pointe, the others in soft ballet slippers, and the contrast between the earthy quality of much of the movement – bold, sweepingly sensuous, and low to the ground – and the soaring lifts, space-devouring Russian pas de chats, and expansive beaten jumps, we are reminded that the power of dance is, from a certain vantage point, the power of flight. As Megan Terry, Aurora Frey, and Jessica Woodman rip off their multiple pirouettes at blistering speed, we half-expect them to launch skyward, leaving a trail of smoke on the stage.

Yet I missed the varied pacing of an earlier incarnation of this work previewed at The Garage in downtown San Francisco, which wove mysterious, elegiac solos, duets, a quartet and quintet through the brisk ensemble work. There is less range of emotion on display in this reworking, which races along frenetically after the lovely, introspective opening, leaving both dancers and audience breathless by the end of the stunning final whirl.

Notable, however, was the chemistry between the noble Matthew Linzer, a Greek demi-god in shimmering sky blue tights, and the delicate but spunky demi-goddess, Emily Kerr. When he sweeps her overhead, she proclaims her delight by unfurling her arms and back with abandon – treacherous from a technical standpoint, but a wonder to behold. Elsewhere, Linzer enfolds her in a gentle bear hug and takes her for a spin, her legs suspended in the air in a generous attitude as she steadies herself with her hands on his hips. Tenderness and steely technique are again equally on display in a supported promenade that has Linzer on his knees, his hands gripping and rotating her thigh while she balances fearlessly in arabesque on pointe.

For a festival of experimental dance to close with a balletic nod to Isadora Duncan may strike some as an unadventurous programming choice. Milissa Payne Bradley’s choreographic ideas run deep, however, and the warm reception her work received at ODC indicates the audience for her quirky brand of classicism will be growing.